For all simulation and projection studies, we assume the DVMP run will be a parallel run with the SIDIS-He3 experiments with exact the same setup. On top of the SIDIS settings, we need to add a proton trigger to form a triple coincidence between electrons, pion- and protons. The existing SoLID detector after improving the timing resolutions, should be able to detect protons. We may can add a dedicate proton detector between the He3 target and the entrance of the CLEO-II magnet to cover a large range of the angle, from 24 degrees up to 65 degrees, with momentum ranges from 300MeV up to 1.2GeV. Simulation study shows that we can double the rates with this detector.

The phase space coverage of electrons and pions would be the same as one in the SIDIS experiment. The proton coverage depends on whether or not we use the recoil detector. On top of the kinematic requirements of SIDIS, the DVMP need to have Q2>4GeV^2 which can dramatically reduce the good event rates and make only the E0=11GeV beam energy setting useful. From now on, we will not consider the 8.8GeV setting.

The main background for the DVMP channel would be the SIDIS events which has 76KHz including physics rate and accidental coincidence rates. The background proton has 1.8MHz rate at forward+large angle regions. The triple coincidence with 30ns time window would reduce the accidental rate to 3.5KHz. 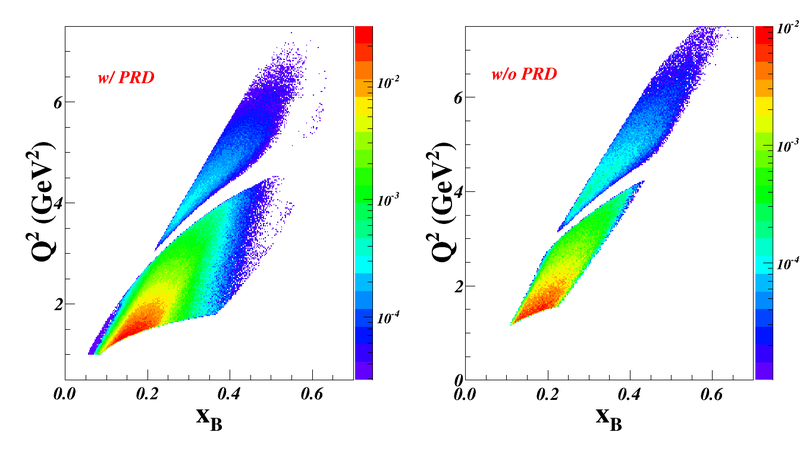 The DVMP and SIDIS Physics Rates

Rates were estimated by weighting the randomly generated DVMP (SIDIS) events with the unpolarized cross sections, the total phase-space used to generate events, the target luminosity, and the acceptance of electrons and pions (and maybe protons if doing a triple coincidence measurement).

Total Proton Rates from all backgrounds

The proton rates were simply counted right in front of the LASPD and FASPD w/o any trigger cuts (e.g. from LGC, HGC or EC). The hadron trigger is produced by MIP.

At this time, I normalized the events rate by the target polarization (60%), effective neutron numbers (86.5%), and dilution factor of neutrons in He3 (90%). These terms go into the rate with a power of two. Then I applied the overall detector efficiencies (85%) and the beam time at 11 GeV (48 days). Hence, the rate you are going to see in the following plots should reflect the "projected real event counts" in each bin.

The following plots should the 1D binning of x or it and the average value of Target-Single-Spin Asymmetries in each bin. I simply binned in ten bins w/o optimize the bin-size. The plots sever as demonstration and we should discuss the final binning we want to present. Plots on the left are with detecting all proton using existing SoLID detector and a new recoil detector, while the plots on the right are w/o a new proton detector.

Here are more precious projected asymmetry results as a function of -t. 7 Bins were defined as shown in the next two plots, one is and one is w/o PRD.

Our dominated background comes from the SIDIS reactions of electrons scattering on the neutron and two protons in He3. The neutron and proton SIDIS events were generated with the generator used for the SIDIS experiments. Both DVMP and SIDIS events were normalized to reflect the "actual" rates in Hz. No target polarization, dilution, inefficiencies and beam time are considered. When estimating the residual SIDIS results, I assumed the target fragments ("X") all contain one or more protons (simply since the SIDIS model don't know the branching ratio of producing protons in the target fragments), so we are overestimate the SIDIS rate. However, considering other proton channels (like proton-knock-out during QE) and accidental events, it may still be a good estimation, although I would expect the SIDIS peak would be much broader.

The next thing to do is to do a more sophisticated calculation of the missing mass. The figure below shows the current resolution of the missing mass spectra is about 100MeV when only taking into account the resolution effect from the SoLID detectors. We will need to consider the radiatve effect, the nucleon effect of the neutron inside He3, and also the Fermi-motion of the neutron in He3. The radiative effect can cause the asymmetry of the peak, while last two effects will further smear the peak. More background events can leak in because of that although the total background events are already small. I am working on estimating these effects.